Open to God Open to You Open to Each Other 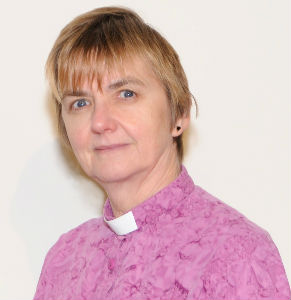 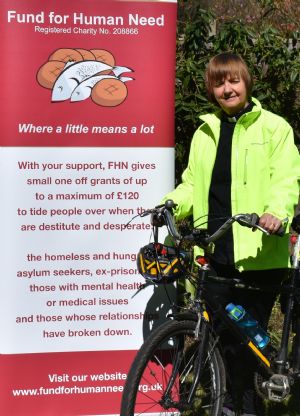 With her 2019 cycle ride being a distant memory, Gill has decided that she will cycle to her Blackpool conference to fundraise for the Fund for Human Need.

Donatiions via her Just Giving Page. Thank you. 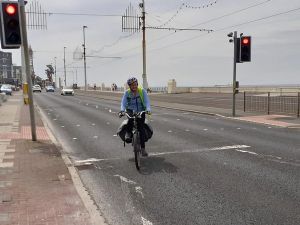 Gill was successful in completing her journey and raised a phenomenal  £3472 for the Fund for Human Need.

The Via Beata is a new pilgrim route running across the widest part of the country from Lowestoft to St David’s. Conceived as a millennium project wood carver Steve Edrington and his wife Gill have been trying to place prayer way stations every ten miles along this route (for further info see http://www.viabeata.co.uk, in Steve’s workshop that I visited on my sabbatical a couple of years ago I met a couple of young people who had come out of drugs rehab and were learning woodcarving as part of the project).

I knew I couldn’t visit all the way stations – it would take too long and it is designed as a walking route, but when our fundraising team were thinking of ways to get cash for our Church Redevelopment project, I opened my big mouth and volunteered myself for a C2C bike ride.

The sensible way would have been West to East, but the logistics of getting my bike on a train at the right time of day to get to Haverfordwest (the nearest large station to St David’s) defeated me, and I opted to start on the bit of the Via Beata I knew, and go Lowestoft to St David’s. 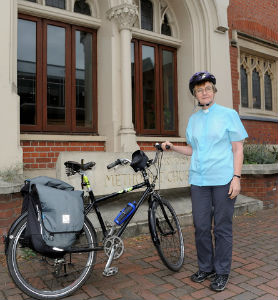 5.55am on the Thursday  3rd October saw me on the early Cambridge train wondering whI had scheduled a Circuit meeting the night before! Getting out of Lowestoft was awkward, but I made reasonable time via Bungay, passing close by to Belsey Bridge where there is a way station, on route to lunch in Wymondham and my first bed for the night, staying with Revd Betty Trinder in Dereham. (Yes I know it is off route but I wanted to save some money on B&B and it was lovely to have a catch up with my good friend Betty), and it was a relatively easy day of 51 miles

Friday should have been longer but still flat and I’d hoped with an early 7.30 am start to have time to visit Ely cathedral on route to Huntingdon. However, the tail end of hurricane Lorenzo was charging across theFens as I was battling into head winds and rain. At one point my google cycle maps took me a couple of miles down quite a good farm track to deposit me on a bridleway which ran along a dyke with very deep waterways on either side. I got off and pushed for at least a mile, it seemed the safest option. Road closures meant that I had a late lunch in Ely with no time to visitthe Cathedral, before pressing on reaching my Air B&B at 7 pm as darkness was falling. A tough 76 miles, but a lovely welcome from the couple who were renting out their room. 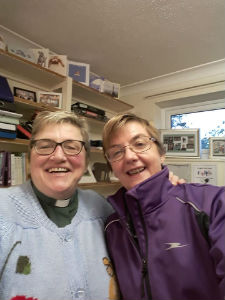 I knew Saturday was going to be hard as it was destined to be my longest mileage day (planned 80 miles). The first part was lovely and I had a second breakfast near Grantham Water. Things started to go wrong around Higham Ferriers with my sat nav trying to take me on the A45 (but the slip road was closed) and I then had a diversion via Wellingborough, which wouldn’t have been too bad if the new bridge on the new housing estate had been completed, so I had to back track and had an extra 6 miles put on my route. Now in a car that isn’t too bad, when you are on a bike, it is. I finally made Stratford-on-Avon YHA as it was going dark, really grateful for a shower and their café. A total of 86 miles and a bit saddle sore!

I had planned an easier day for Sunday, to get to Hereford to stay with Deacon Angie Allport a friend who has just taken up post there. This was the first really hilly bit (over the Malvern Hills) and it was at this point that I realised my ‘granny gears’ weren’t working. I had a full bike service the week before, but I think the new cables had stretched – and only my middle bracket was working properly. There are some steep climbs – and I ended up pushing quite a bit. I did reach Hereford in reasonable time, so could enjoy a soak in a bath before a lovely meal with Angie. Again did a few miles more than I intended, but this time only 58 miles.

On Monday, I had a shorter day planned but went first of all to Halfords in Hereford where they sorted out my gearing – I reckoned I would need it for Wales, and I did. Getting to Hay-on-Wye was OK, and I had a leisurely  lunch there, thinking  that I was over half way. However the head wind on the A 470 was really strong, so I followed a National Cycle route away from the main A 40 which took me on a pretty detour up into the Brecons! The result was that I was too late to visit little Brecon Cathedral but I met a lovely couple who ran a beautiful Air B&B and clocked up 52 miles. 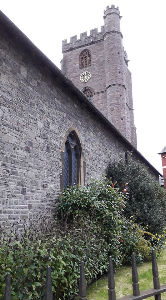 I decided on the Tuesday to stick to the main A 40 to reduce my mileage, (64 miles cycled) but the  gusty showers and heavy rain didn’t make it the most pleasant of journeys. I did however reach Carmarthen in reasonable time and decided to lighten my load by posting some of my dirty washing home to Graham!

On the advice of a lovely guy in an independent bike shop in Carmarthen I didn’t take the dual carriageway A40 out of the town but went on the National Cycle route 4 – guess what – it was very pretty, and very, very hilly, so I re-joined the A40 and made reasonable time to Haverfordwest despite the weather. I’d been told that the route via Bethlehem was a good one, but decided I didn’t want the extra 6 miles. After having lunch and picking up my tickets for the return train journey I plodded on to St David's 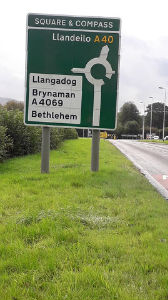 Google maps again took me the pretty route (which should have been shorter), along the coast road, 16% hills  with  the winds  the gusting in between 20 -30 miles an hour.

I pushed a lot. I nearly gave up and if I had seen a taxi that could have taken my bike I think I would have. It definitely was the toughest part of my journey and the most frightening. I relied on the prayers of my friends and somehow plodded on.
Guess what – I was too late to go inside St David’s Cathedral, and I hope to visit again some day (by car!). The Youth Hostel was 3 miles north, and very remote,
but joy of joys I had been upgraded to a single room and there was a bath as well as a shower! 58 very tough miles – but I had made it! 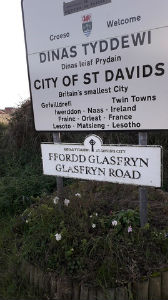 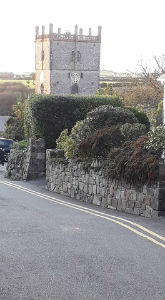 Thursday saw me homeward bound, (a different route to Haverfordwest, longer at 21 miles, but oh so much easier) and I saw this wonderful sunrise over St David’s. I’m sorry that I didn’t take more photos, but the rain and worry that if I stopped too much I wouldn’t get to my accommodation meant I was concentrating on cycling rather than pictures! 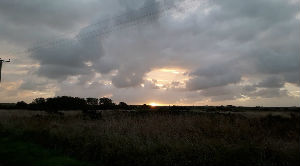 Then the train to Paddington, with an interesting cycle across London dodging tourists on Boris bikes and cycle couriers (the traffic is no problem in comparison) to finally make it home at 7.30 pm tired but happy, having cycled a total of 458 miles my wonderful husband who was worried sick about this enterprise but tried to not to let it show on the phone had made  a comforting bowl of soup and bought roses, fizz and chocolates. He’s a star!

Thank you to all who have texted encouragement, prayed, sponsored me and held me in God’s light. It was for me, a prayer journey, a time of acknowledging blessing on the Via Beata giving thanks for those who have blessed me, as well as raising money. I think the total pledged is around £4000 which is amazing. 20% of this will go to the charity Kickstart which runs from the church, helping people get back into work, and the rest to our redevelopment project to make all the church premises accessible for all and to install a Changing Places toilet for adults with special needs.